Peak School’s latest newsletter is available to read now. Find out the latest news around the school and upcoming events.

A belated Eid Mubarak to our Muslim community who celebrated the ending of Ramadan last weekend.  We appreciate how important this celebration is to you.

We come to the last newsletter of the year and what a busy and productive year it has been.  We have tried to capture part of it in our year book, which is now available and our children are already enjoying looking back over the year.

A reminder that the end of year reports will be available, via Gateway, on Monday afternoon at 3pm.  The reports include a social/emotional comment as well as a maths, English, Chinese, PE and Music comment.  There is also an ICT comment for our Year 1 and 2 children.

I would like to take this opportunity to thank all our staff, parents and children for making Peak School the special place that it is.  Our School Council and PTA have worked very hard in the background to ensure our children and staff are extremely well supported.  We are also very lucky to be part of ESF and the Foundation have been terrific this year in their support also.

I would also like to wish all the families, who are leaving us this year, all the very best for the future and to those families that have been with us for many years and now have their last child leaving Peak School, thank you for your tremendous support.

I do hope you have an opportunity to spend some time with your child/ren during their summer break and we look forward to welcoming most of you back in the new academic year which starts on Tuesday, 14 August.

Again, thank you for your continued support. 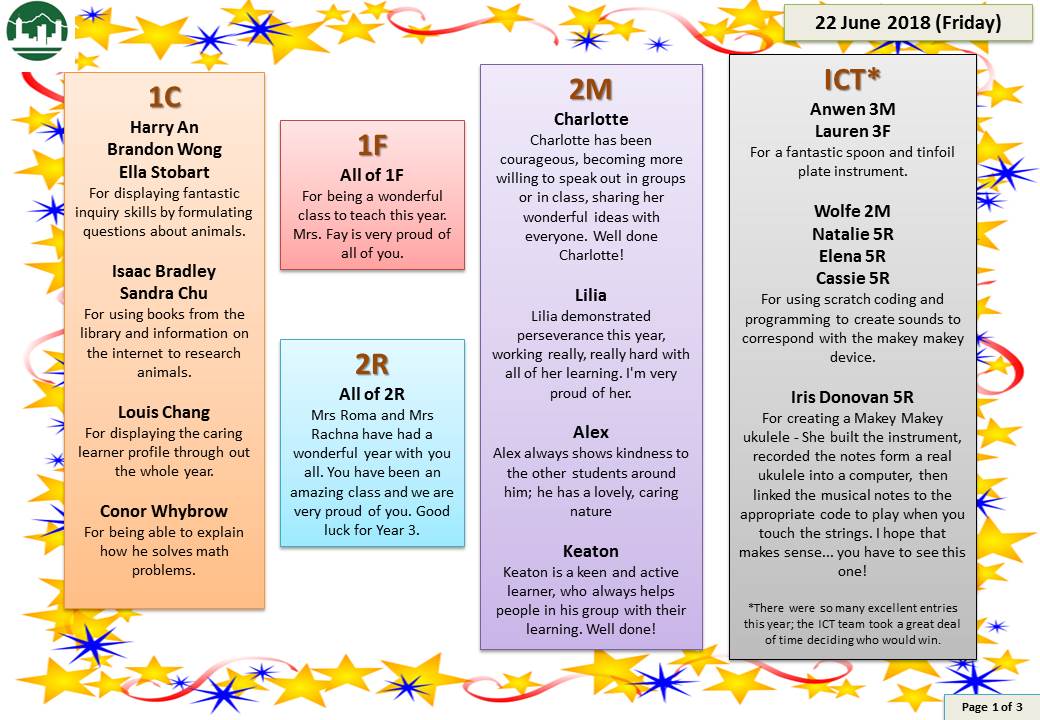 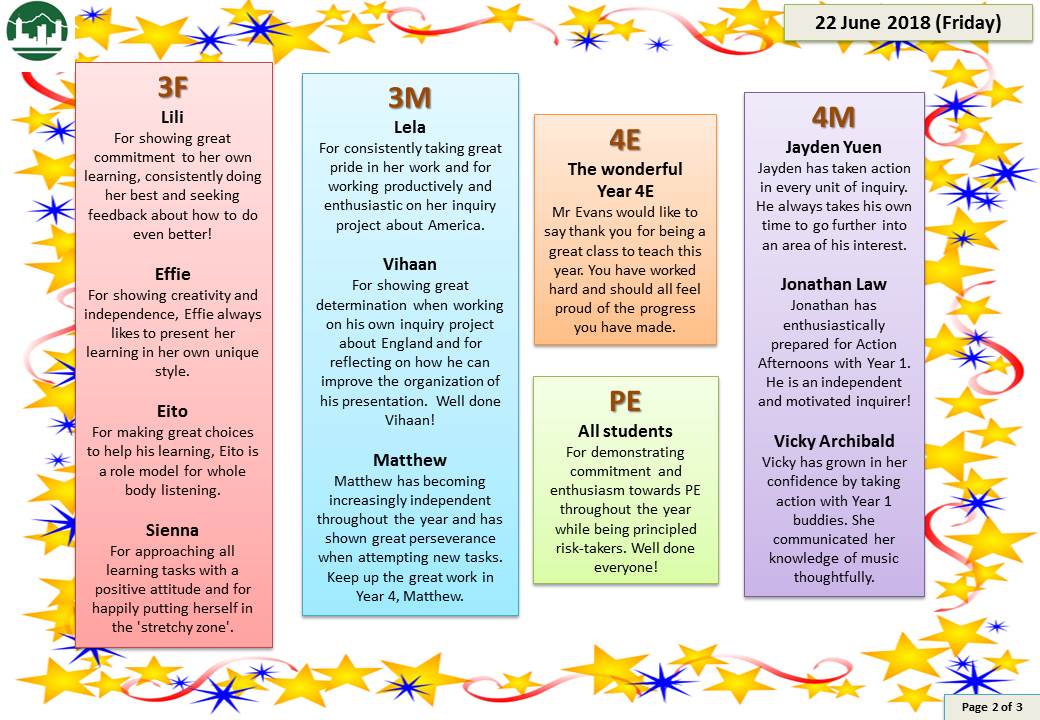 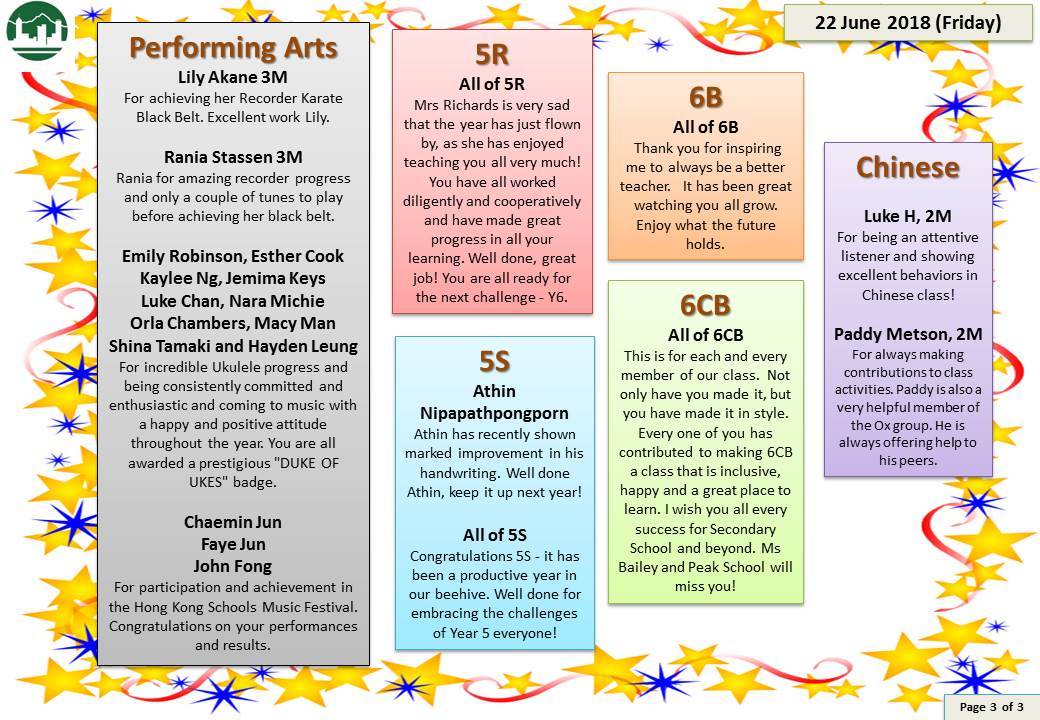 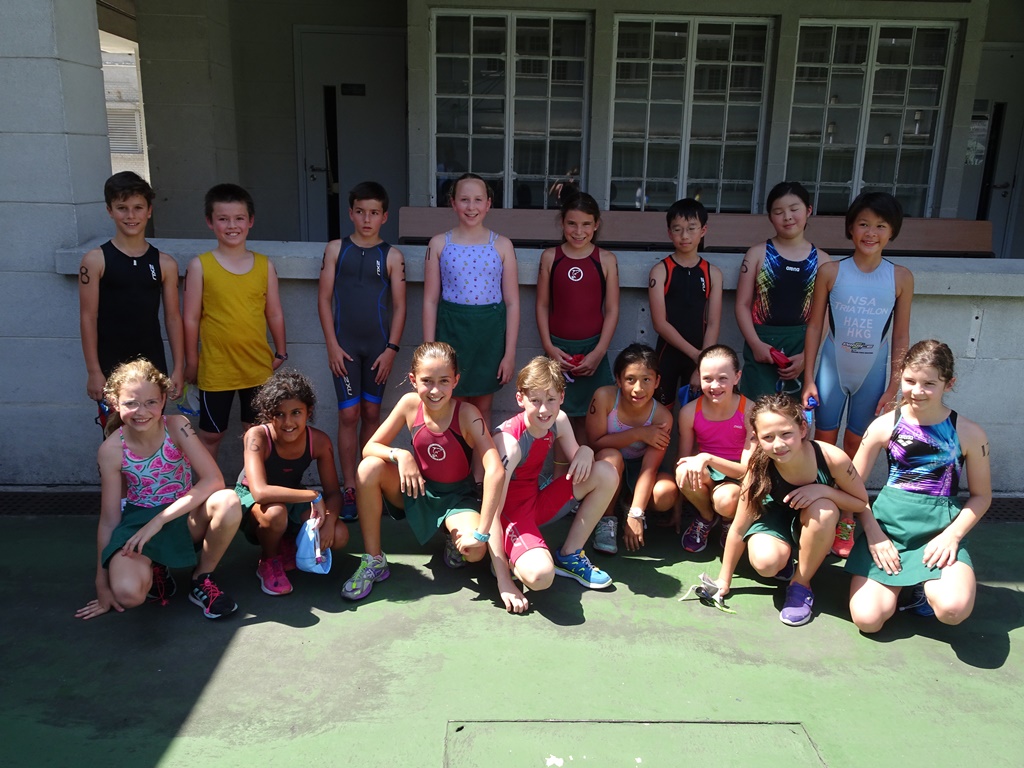 Imagine swimming a ¼ kilometer then jumping out of the pool, putting on your running shoes and running a kilometer, all as fast as you can without any rest. Well that is what 18 dedicated and passionate members of the Aquathon Club did week after week at the Kowloon Cricket Club this term. Whether it was hot, rainy or both, they pushed themselves and improved their times significantly. During their season the team participated in the ESF Schools Race at KGV. Although the course was slightly longer, the team did very well. Unfortunately their last race, The ESF/International Race was cancelled due to poor weather. 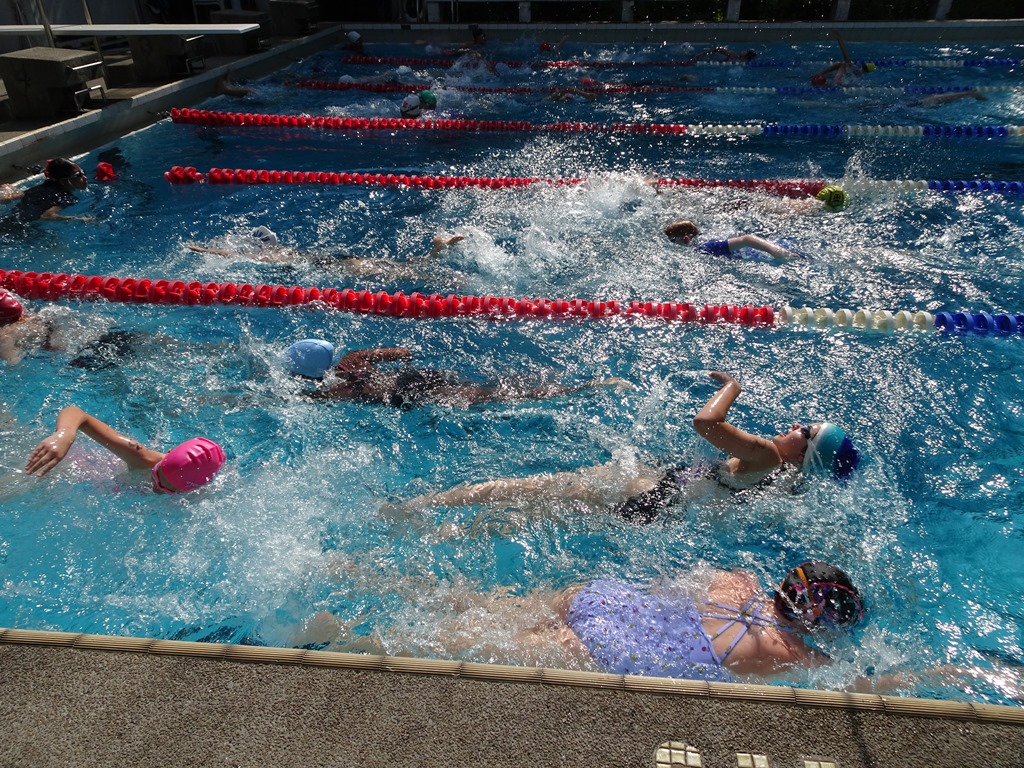 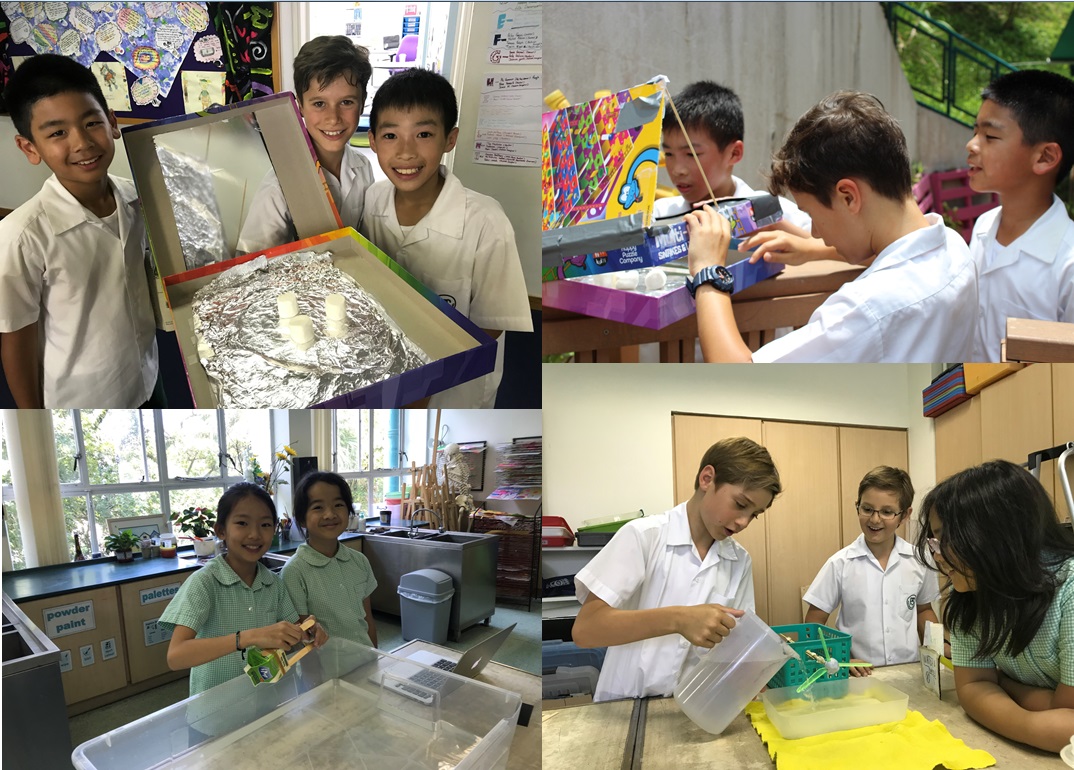 The Peak School Year 5 Science Fair was held on Thursday 7th June. It was an amazing opportunity to learn about energy and its forms. Some notable examples included: electrical, chemical and thermal energy.

Not only was it part of the How the World works unit, but it was also the second major school project (the first being the Winter Fair). 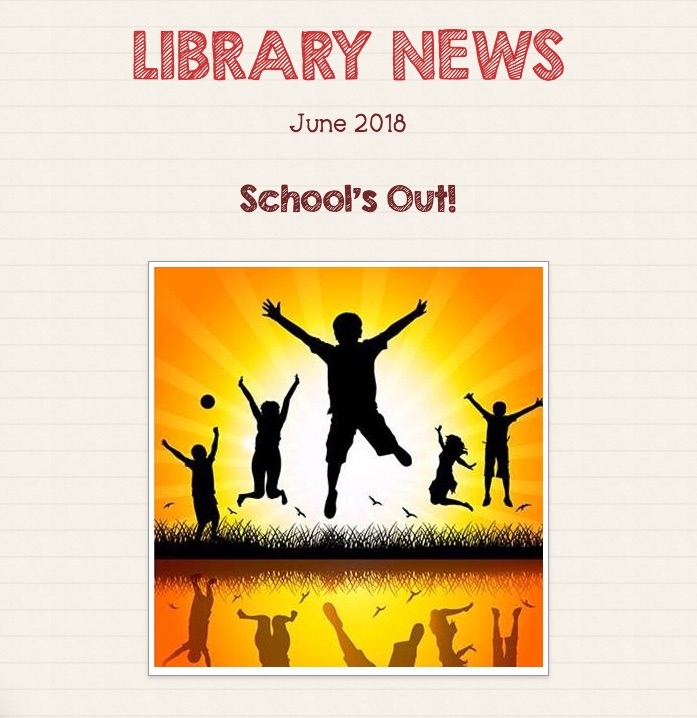 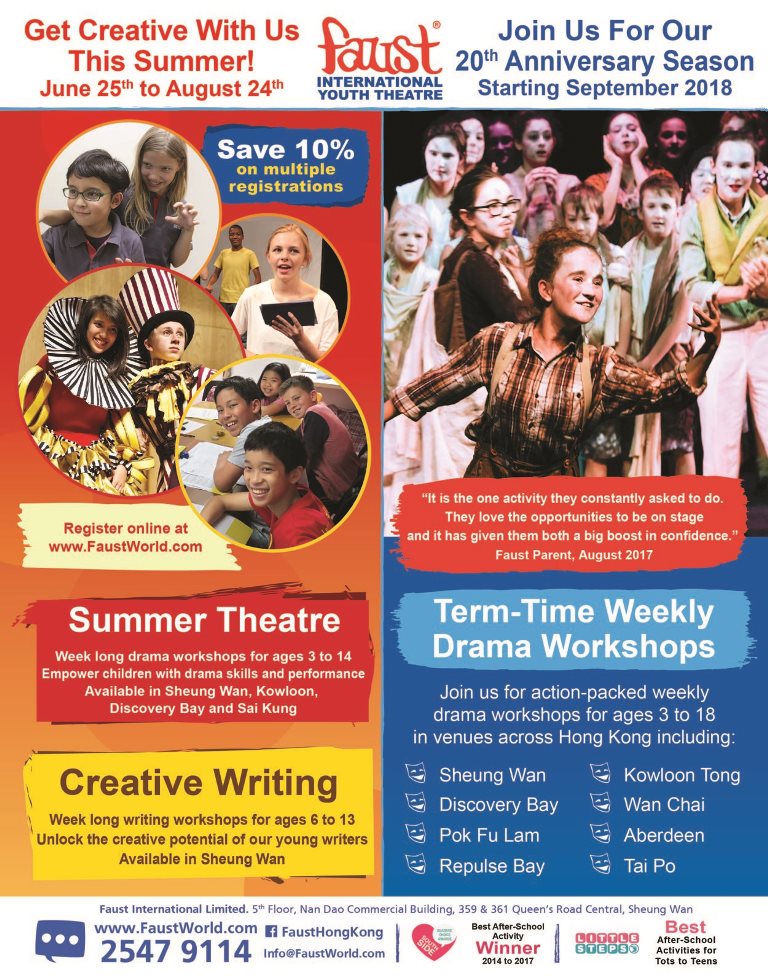 Welcome and please be advised that ESF uses cookies. By accessing an ESF, ESL or PTA web site and other online ESF services, such as ESF’s mobile app, users agree that ESF can store and access cookies, IP addresses and use other methods in order to collect website usage data, and improve user’s online experience. By continuing to access this web site, users agree to the use of cookies, which is handled in accordance to the ESF Data Privacy Policy. Information collected via cookies is handled in accordance with the ESF Personal Data Handling Policy and its related Personal Information Collection Statements (“PICS”). A copy of the PICS can be found on the ESF web site

Welcome and please be advised that ESF uses cookies. By continuing to access this web site, users agree to the use of cookies and the information collected by them by ESF.